The newest expansion in 2020, Path of Exile: Delirium, promises tougher challenges by way of the Mirror of Delirium, ghostly mists, and monstrous spawns. It also adds several unique items, skills, and reworks to the Atlas of Worlds. Both the massive passive tree and selection of items are seeing expansion here, adding further depth and complexity to the game. Check out Everything New You Need to Know About Path Of Exile: Delirium, and help you know everything new and exciting.

Interaction With Past Leagues

While new leagues typically focus on making its own mechanic as engaging as possible, the developers of Path of Exile have been incorporating past league mechanics into newer ones recently, with Delerium being no exception.

Orbs of Delirium do this with maps, but the actual Delirium mechanic itself has the chance of interweaving old mechanics like Breach hands into your encounters. Legion armies from the "Legion" league can be affected by the fog, giving them horrific modifiers in exchange for even more loot than normal. It can also affect league-exclusive areas like the Temple of Atzoatl from the "Incursion" league as well.

The Mirror of Delirium

A major focus of the expansion lies in players discovering the Mirror of Delirium. Activating this new object will spawn new opponents and make existing ones far more powerful, so it is wise to consider carefully the best time to dive in. There will be plenty of monster modifiers added to make situations far deadlier than they are now, along with new bosses and both rare and unique monsters.

One of the most important items of this expansion will be Orbs of Delirium. These can be applied to endgame maps to directly affect how intense a player experiences their Delirium. One Orb will be difficult, and up to five can be used in a single encounter for the most difficult modifiers, but also the best rewards.

One of the most important announcements from the expansion is the ability to continue expanding a player's skill tree. Players will have to option to extend their passive skill trees using a Cluster Jewel, placed in the outermost sockets, with craftable mods to improve the passives that can be acquired. In total, players will have the ability to add one of 280 new notables, or to graft additional sockets for even greater expansion. 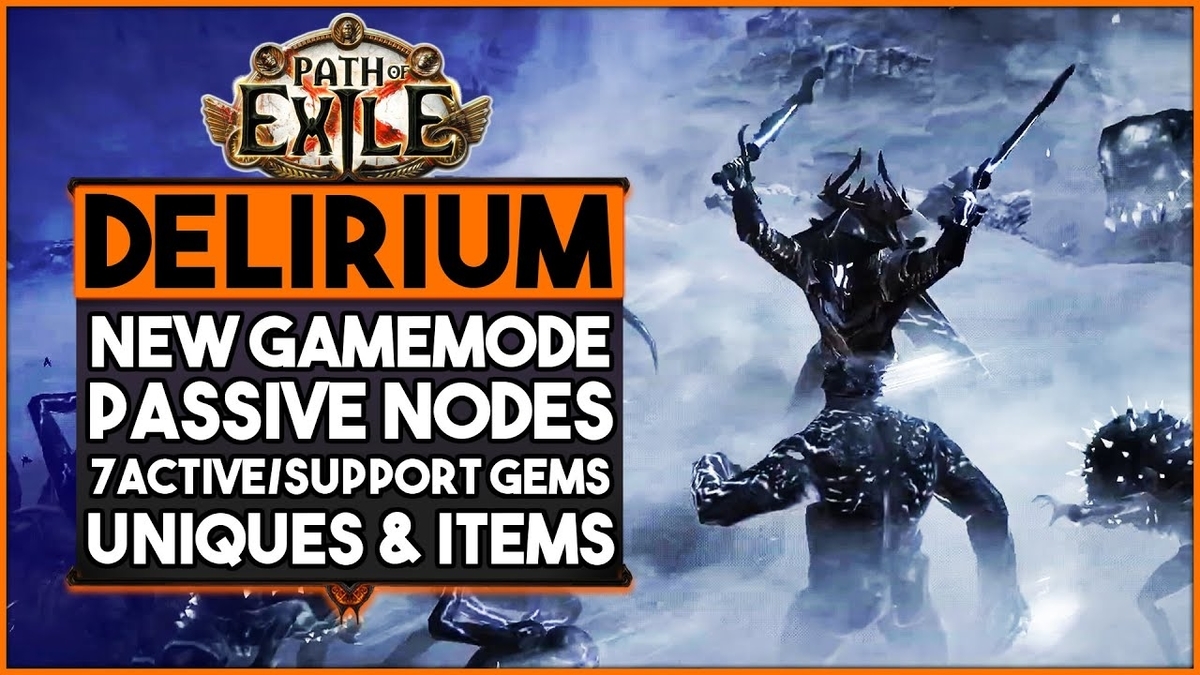 Delirium will introduce a total of four new Skills games and three new Support Gems. There are also new items being added, including new Divination Cards and Unique Items that will further promote new and unique build opportunities.

Since the passive tree is seeing some expansion thanks to the new jewels, there are new no tables available for players to experiment with.

One of the new notables shown is called Hollow Palm Technique, which grants a massive 60% more attack speed rating while counting you as dual-wielding. The downside of this node is it only works when you have no main hand or offhand item equipped, and you can't be using any gloves. This allows crafty players to create a monk-Esque playstyle with unarmed strikes.

In Delirium, every encounter you complete will drop splinters that can be combined to craft a unique map. This map is called The Simulacrum, which will teleport players to a difficult encounter that will shower you with loot upon completion.

A new league gives both new and veteran players a chance to make currency in a fresh economy.

Leagues take place separate from the main Standard league of Path of Exile. Because of this, nothing from Standard carries over to a new league, meaning everyone is on equal footing in terms of currency, levels, and overall power. If you are crafty with buying and selling items, a new economy can give you a chance to shine over others and create a dream build well before others can afford the same. It also allows veteran players to hone their skills leveling quickly or completing maps with minimal gear.

Many Path of Exile fans have complained that the Conquerers of the Atlas expansion was too confusing and encouraged players not to complete maps for optimal Atlas bonuses. This is being addressed in "Delirium."

Returning vendor recipes should allow players to undo progression on their Atlas to target-farm items they wish. Conquerers are now deterministic when it comes to spawning, making progression through the Atlas much easier. Vaal side areas and the Temple of Atzoatl are also receiving some much-needed attention to keep them up to date with modern mechanics and systems.

Both base packs cost $30 USD and include 250 points, a title, weapon effect, cloak, portrait frame, and the Delirium League Extended Digital Soundtrack. The Elite Fateweaver and Darkseer Packs offer similar items for $60, including more points and upgrade cosmetics.

Path of Exile: Delirium will release on March 13, 2020, for PC players. You can learn more about Path of Exile: Delirium through Eznpc. In fact, eznpc.com is also the best place to buy PoE currency safely and cheaply. You can buy PoE Chaos Orbs, PoE Exalted Orbs, and other Poe Items here. Buy cheap PoE Currency with awesome coupon codes now!

Login to quote this blog

You cannot quote because this article is private.